This is a guest post by Ferenc, the other co-founder of Bitongo.

In this article, I’ll briefly talk about the tools we built and use to communicate with our customers.

Having worked a little on support (among many things) in a multinational company, it felt natural to ship our products so that we can communicate with our players.  In the early days, it was only two features we did tho:

The first is a great tool to broadcast messages to all our customers, while the latter is useful for us to learn our customers’ needs. With MOTD we can broadcast messages like, when our new release will be due or available, or even when our multiplayer game server is down for maintenance (that server runs on a different stack). In the early days, it was only text we could deliver but little by little we added more features. Now it’s capable of opening urls inapp to show web pages including videos or forms to collect email addresses, which proved to be very effective in cross promotion when we released Soctics League. (In a coming article, I’ll write more about this).  Also, very effective in making our players tweet their love of the game.

Technically, there’s nothing fancy. We keep a json file updated with the necessary information, something like this:

We use a simple AlertView to show this message. The title / message and the buttons are customized with the content of the json. 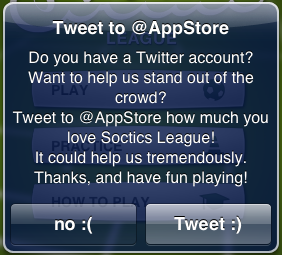 Note the open_url part. With url and alt_url we can make sure, that devices with or without the Facebook app being installed can open the Facebook page of Soctics.
(ie: [[UIApplication sharedApplication] canOpenURL:url]).

This was also extremely effective in getting our players tweet about Soctics. Hundreds of players were willing to press the Tweet button and then post a pre-edited text. Maybe the smilies helped there too

Feedback turned out to be very useful as well. Not only would players send their best advices but also it’s more likely to share their frustration on the feedback channel rather than on  the app store, resulting higher app rating. Also, when we manage to finish something they asked for, its also reflected by the stars. 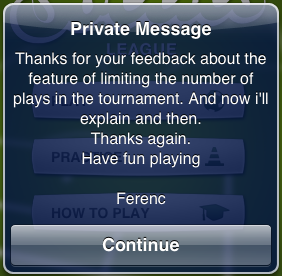 Feedback however, was a one way communication: from customers to us. Thus we had to fix that by adding a feature that we can use to privately answer feedbacks. This is very powerful as not only get’s a feedback message answered but many times that ends up in a discussion which is very useful to dig deep and clarify problems and ideas.

Notice the empty line in the alert view. \n goes a long way. The UIAlertView also supports longer text that are bigger then a screen, although thats not as nice as the default look.

There is one more thing we did use a lot while developing and after releasing Soctics League, which is real time chat but is not tied yet to our MOTD system. The real time chat room was first introduced in the previous version of the game where players could chat between matches. We did also visited it and gave real time support to our customers. This is probably the most time consuming form of customer care but while doing so, many of our customers gave valuable feedback just because we were accessible. Probably, many of those players wouldn’t even write a feedback.

What tools, methods are you using for talking to your customers?

Would you be interested in an easy to integrate SDK along with a web page that lets you do what I described above?  Sign up at our LaunchRock site motd.bitongo.com or just leave a comment here.

UPDATE: here is another post further discussing what MOTD is capable of: how-we-used-uiwebview-along-with-launchrock-to-engage-mobile-users.

This entry was posted in App, idevblogaday, Uncategorized. Bookmark the permalink.