When it comes to monetizing apps through ad providers, a developer has a plethora of choices in 2012. Banner ads, interstitial ads, video ads, app cross promotions, etc. Each provider claims to be the best, but how do they perform in real life? Read on for our latest tests.

In part I., we are going to focus on the more traditional ad type: banners.

We conducted the tests in our latest game, Soctics. The following ad providers were tested:

iAd does not provide ads in every country where the App Store is available, so we decided  to group it together with AdMob. We would give priority to iAd requests, then access AdMob if we don’t receive anything from Apple. Mobclix claims to receive possible ads from 30+ traffic sources and it should be able to fill your banner space all over the world, so we felt this grouping to be fair.

On even days, we would use iAd + AdMob, on odd days we would go with Mobclix. We used the month of June for our benchmark.

So without further ado, lets see the results! 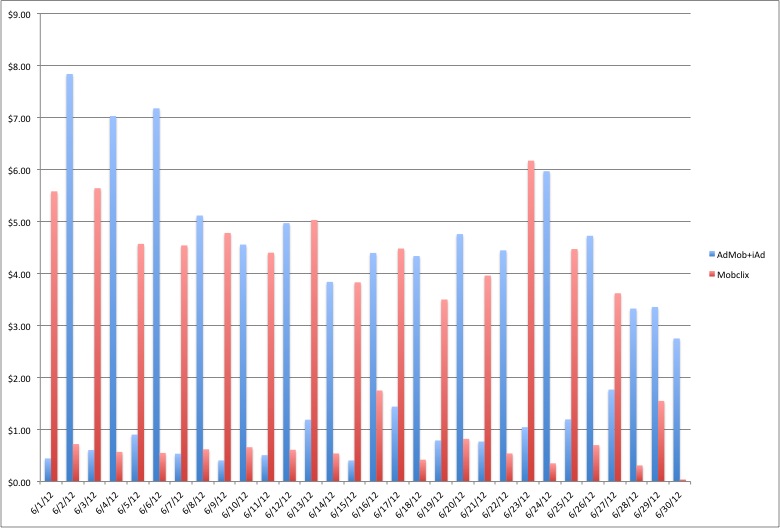 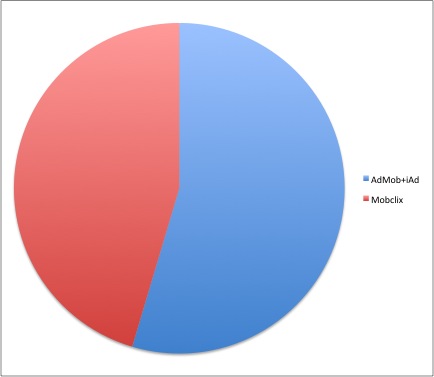 Albeit slightly, but the iAd + AdMob combination came out as victor. If we kept testing the providers, the difference might even have been smaller between the two, but for now, we can say that we gained more revenue from iAd + AdMob than from Mobclix.

What really made us flip the off switch on Mobclix were the following:

- Mobclix’s payment terms: they seem to offer net 90 payments while with iAd and AdMob you get your earning quicker
- on Mobclix’s website, there seems to be a continuous apologizing for late payments, messed up stuff really all the time. Taking into account that their default payment schedule would be 90 days, you could end up with 120+ days of payment schedules
- sometimes Mobclix’s ads would be awful animated banners. Even if we totally discard aesthetics , what we  cannot go by is the huge performance hit we saw while displaying these animated ads. Given the fact that we are using an OpenGL based game, this was a big discouragement for us

Switching off Mobclix was a no-brainer given the facts listed above. For now, we have a clear winner for banner ads!

Let us know if you are interested in similar tests for interstitials, or even video offers, etc!

This entry was posted in idevblogaday. Bookmark the permalink.